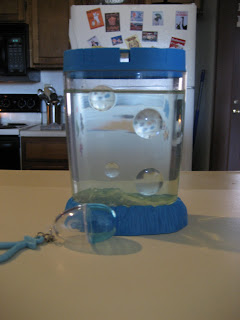 Being the totally awesome mom that I am (or so I tell myself), I bought Dylan Sea Monkeys. I had these little pets when I was about nine, and I was totally obsessed. They are actually a breed of brine shrimp, in which scientists (or bored, smart people) found a way to freeze the growth cycle of the shrimp at the egg phase by dehydrating them. The dehydration, in a way, made them "Insta-Pets". This is a pet that required little attention. Well, not even attention, you just sprinkle in a little food and they swim and they thrive. Amazing. All this from little 1 by 1 powder packets.
This all began to unfold 70 hours ago. Carefully reading my guide, I purified the water 24 hours prior to adding the Monkey eggs. When the 24 hour period was up, I added the eggs and waited. I became impatient. Me? Never. Luckily for those little guys, I happened to check today and saw the little fleet-o-shrimp bobbing up to the surface. They were eating and swimming. Busy day.
The set I bought Dylan was basic blue and came with a bonus keychain. Why? Do people really carry around a keychain of Sea Monkeys? I can say I felt no urge to clip on my bubble of Monkeys next to my Ed Hardy skull and rose keychain. C'mon now! Even for the age group of 5 and up (which is the "recommended" age group), who carries a keychain? Who even has keys at that age?
Well anyways, I thought back to when I parented my own little batch. They ate (a lot less than I actually put in the tank because the algae overtook the water and suffocated my guys). They swam. They reproduced. I mean, what else do you do in a tank of water when you're a simple celled organisim?
Aha! 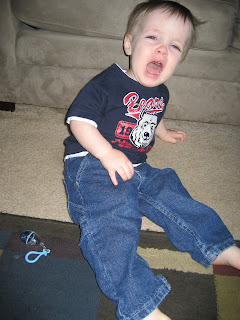 It all dawned on me when I saw Dylan carrying this keychain. He looked up at me, smiled and then thrashed the ba-jesus out of the keychain and everything around him. This keychain has a morbid purpose. Population control. According to the Sea Monkey guide, these guys are supposed to survive for up to 18 hours in their lovely keychain bubble. When placed in the hands of Dylan, I give it 5 minutes.
As for now, the Monkeys are in safe keeping. We'll just call this "Monkey Watch". I don't know why, it just sounds good to me at this moment. I'm taking bets on how long they will live. I say maybe a month until I get bored, or Dylan knocks them over. They're instant, which means they're disposable.
Posted by Ashley Crenshaw at Wednesday, April 29, 2009 No comments: Links to this post

Little Did I Know 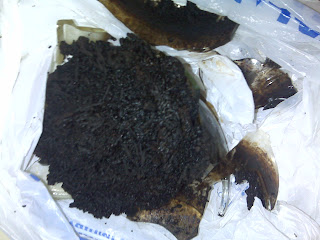 that Rice-A-Roni, when placed in the microwave, sets on fire. Being a good little cook, I followed directions (are they really hard to follow anyways, come on). I have cooked this rice in the microwave a million times before, being a college student with little/no income. I know this whole microwave-ing thing should be easy and will produce the same outcome each time. Correct?
Well, mama bear was taking care of baby bear while the Roni was doing it's cooking in the oven and KA-BAM! The smoke alarms go off. I run up to the kitchen to make sure the microwave itself was not on fire. Nothing there. I tramp up to the top floor and open the windows to air out the smoke. I run back down to the kitchen, while baby bear is in the basement (banging on the baby gate), angry that he wasn't invited on this escapade.
I get smart and use oven mits to remove the Pyrex bowl filled with ash of Roni, from the microwave. Then, proceed to put the bowl in the kitchen sink. The bottom falls out of the bowl. Ash of Roni all over the counter and floors that I spent hours cleaning yesterday.
As I type, the house still smells like a combination of burned cheese and hair, possibly some other foreign smell. This is ungodly. After spending eight hours cleaning the whole house, it now smells blagh.
The moral of the story? Don't trust rice in the microwave. Or, don't clean your house. I like the second option better.
Posted by Ashley Crenshaw at Monday, April 27, 2009 No comments: Links to this post